9 Marketplace Alternatives to Amazon and Ebay

While Amazon and Ebay dominate the online marketplace space, alternatives exist, especially in foreign markets where these two players have often struggled to gain traction or offer only a few categories of products. In the U.S., many selle

While Amazon and Ebay dominate the online marketplace space, alternatives exist, especially in foreign markets where these two players have often struggled to gain traction or offer only a few categories of products. In the U.S., many sellers are disenchanted with the terms and conditions of the two big players.

Furthermore, ecommerce is becoming more international as middle class shoppers in countries such as China, India, and Mexico seeking a greater variety of goods are eagerly flocking to online marketplaces.

Here are a few marketplace options available to U.S. and non-U.S. sellers.

Newegg. A haven for male tech geeks until it opened up to third-party sellers, Newegg now offers clothing along with automotive, sporting, and industrial products in addition to consumer electronics. It still has a macho vibe, offering a man cave sweepstakes. Commission rates run from 8 to 15 percent (including credit card fees) depending on type of product, and new sellers must go through an approval process. All items must be shipped within 72 hours of order confirmation and the company gives sellers the option of fulfilling orders themselves or letting Newegg do it. Newegg has over 700 sellers on its site. 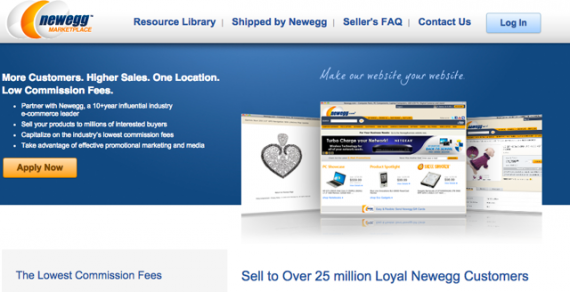 Newegg charges sellers commission rates run from 8 to 15 percent, depending on type of product.

Rakuten. This company is part of a global network of Japanese-owned marketplaces with sales in Europe, the Americas, and Asia. Membership is billed at $99 a quarter and commission ranges from 8-15 percent depending on the product category. The fee per item is 99 cents, charged only when an item actually sells. Sellers can make products available to the Japanese market at no additional charge and can create their own branded storefront.

Sears.com. The website offers three different services to third-party sellers: Advertise on Sears, Sell on Sears, and Fulfilled on Sears. The advertising service is based on cost per click — sellers are only charged a fee when a customer clicks through to the seller’s site. Fees range from 15 to 75 cents. Sell on Sears costs $39.99 a month plus a commission of 7 to 20 percent based on product category. With Fulfilled by Sears, sellers ship the products they want to sell on Sears.com to one of the company’s warehouses. Sears stores it, and fulfills orders via its distribution system. There is a monthly fee of $39.99 and storage fees start at $0.45 per cubic foot. 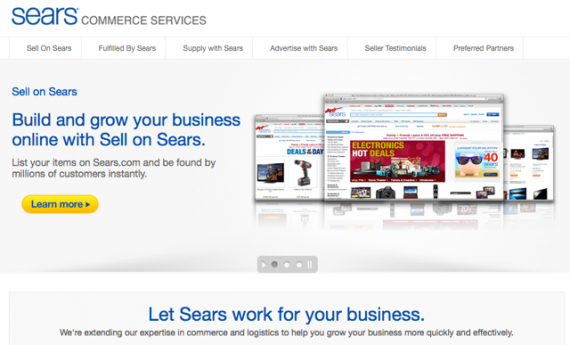 Etsy. This site is for artistic types, selling unique hand-made creations along with small-batch manufactured goods. Each item listed on Etsy costs sellers 20 cents when the listing is published. A listing lasts for four months or until the item is sold. Once a sale occurs, Etsy collects a 3.5 percent transaction fee on the item’s sales price.

Jet. This new entrant into the online marketplace will open later this year. Started by the founder of Diapers.com, which was sold to Amazon, Jet.com has a commission structure similar to Amazon’s, however it will allow sellers to adjust commissions based on things like a shopper’s shipping distance or order size.

Most foreign marketplaces require that storefronts be in the native language.

Mercado Libre. This site is the most popular ecommerce site in Latin America, with Mexico and Brazil comprising 60 percent of its total merchandise value. The site offers a Cross Border Trade program for foreign sellers that is operational in Brazil and Mexico and will eventually be available in other Latin American countries. Listings should be available in the native language of the countries and Mercado users can choose from a basic, free web store, or pay monthly subscriptions for enhanced functionality and value added services on their stores. Mercado Libre offers assistance with logistics, payments, translation, and localization.

This is not a comprehensive list. No Indian marketplaces were included, for example, because Indian law requires that all goods sold online must be locally manufactured.